As you cross the wooden bridge over the Samsen Canal, leading into Xavier Hall, Bangkok, the first thing that strikes your attention is the Chapel. Draw nearer and you will notice at the center of the Chapel steps a small fish pond. In the wall above it, two bricks of different size are imbedded. They are historical relics: the smaller one is thought to be from the ruins of a church of the Society of Jesus in Ayutthaya; the larger one from the ruins of the Jesuit observatory of Lopburi. The historical ruins can be seen even today.

In Ayutthaya, the former capital of Thailand, two or three miles south of the present city, on the west bank of the Chao Phraya River, there is a small mound that the local people call “Baan Yesuit”, that is, Jesuit Village. On the ground can be seen two stone steps, a few bricks, and a stone holy-water fountain. Not far from the “Baan Yesuit” to the north, there is a similar mound called “Baan Yacobin”, that is, the Dominican House.

In Lopburi, southeast of the present city, in the forest on the east side of the railway, there is a rather impressive ruin, eight to ten meters high, called by the Thais, “Wat Sao Paolo”. This was most probably the tower of the observatory annexed to the residence of the Jesuits. 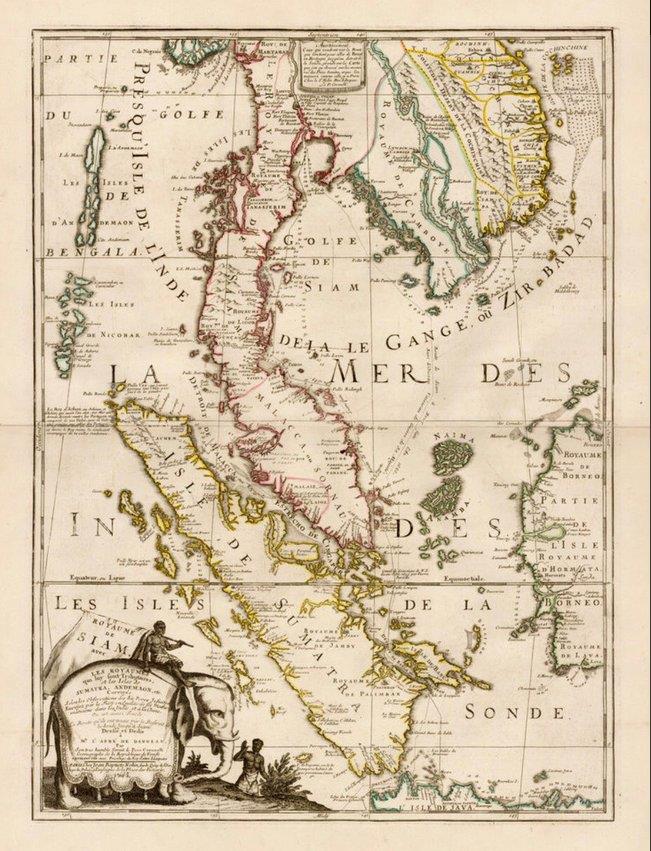 This 17th century map is the result of France’s first embassy to Southeast Asia in 1685, which was led by the Chevalier de Chaumont in the company of six Jesuit fathers.

In 1954, the Society of Jesus returned to Thailand after 187 years of absence (since the fall of Ayutthaya), this time at the request of Mgr. Louis Chorin, Apostolic Vicar of the Catholic Mission of Bangkok, who asked the Society of Jesus to share in the evangelization of His Vicariate.

Today, the Jesuits work in three major cities of Thailand: Bangkok, Chiangmai, and Chiangrai.  These pages give you an introduction to our varied works today.